Art for the people 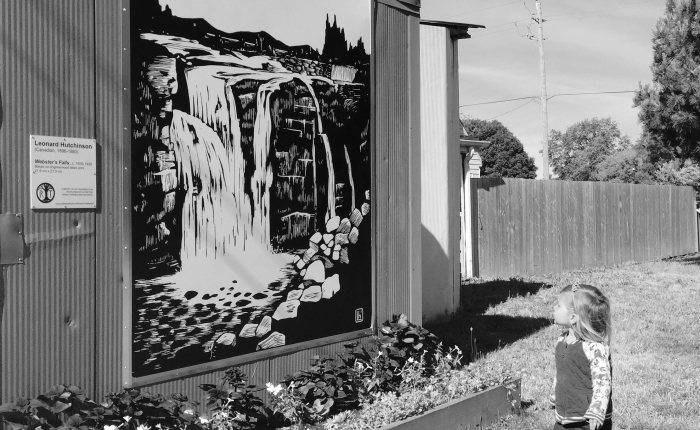 The “Crown Point Gallery” art collection has increased again with the acquisition and installation of a mural on the Pipeline Trail. Located on a freshly painted shed just east of Fairfield Avenue, the mural is an enlarged reproduction of Leonard Hutchinson’s (1896-1980) woodblock print Webster’s Falls. The dynamic black and white relief jumps out from a distance at any passerby. Atmospherically, the sun acts as a natural spotlight for the image and the nearby birds add to the experience, as if you are standing right there viewing the rushing waters.

The group behind the installation is the Red Tree Collective of artists. Their aim “…is to work in interdisciplinary and cross-cultural collaborations with artist and/or community members.” For more information, visit http://www.redtreecollective.ca.  According to collective member Ingrid Mayrhofer, the group partnered with Elizabeth Seidl from the Pipeline Trail Committee and she assisted with selecting an image and a suitable site.

Leonard Hutchinson’s artwork was chosen for a number of reasons. First, without going into extensive biographical detail, Hutchinson is considered one of the best woodblock printmakers in Canada during the mid-twentieth century. His home was Hamilton and he was one of a few artists who emotionally and simplistically depicted rural Ontario, the uncomfortable reality of Hamilton life during the Great Depression, and everyday workers’ portraits—from the blacksmith to the tobacco field worker. Second, Mayrhofer points out that one of the founding members of the Red Tree Collective is his daughter Lynn Hutchinson; gaining permission to use the work was one less hurdle in such a project. And third, the image of Webster’s Falls, though far west of the mural’s location, resonates with the idea of water flowing along the Pipeline Trail.

Once the imagery was secured, the last part of the project was to find an appropriate context and location. Mayrhofer states that once the garage at Fairfield Avenue had been identified as their choice location, “It did not take long at all to convince owners Bethany Osborne and Ed Miedma to host our mural trailhead.” Being happy to participate, Miedma even went ahead and put on a fresh coat of neutral grey-blue paint. He also enhanced the foot of the shed with a raised garden box.

Naturally close to the art installation, Osborne has overheard community members responding to the new mural. “I have seen mothers explain the art to their children in strollers. Groups of various people just stand in front, looking and enjoying—even stopping and chatting in front of it. It’s only been a week, but I think its presence has already started to change the flow of activity on the trail.”

Hutchinson’s work is not the first art addition to the Pipeline Trail. One block east, near Strathearne, is another cooperative project headed by the Red Tree Collective: a garden box boasting artistic expression of black and white etchings similar to his, but with a more organic and abstract subject matter. Within the next block east of Hutchinson’s artwork, the group aims to continue to work with the Pipeline Committee on further art initiatives. One may even say that the Pipeline Trail is beginning to exemplify a well-curated exhibition, open to the elements.